Things To Do In Bhaktapur

Planning A Trip To Bhaktapur? Here's our list of top things to do in Bhaktapur

Bhaktapur is one of the three major cities located in Kathmandu Valley, Nepal. While this ancient Newar town was once the capital of the nation, its royal status has since been subjugated; however, it still manages to retain its traditional ambiance with antiquated architecture, ancient houses, age-old customs and environment. Locally also known as ‘Bhadgaon’ or by its Newari name ‘Khwopa’, Bhaktapur is a city that wears its heritage and culture on its sleeve.

A study of the architecture in Bhaktapur will reveal that the ancient Malla dynasty played a crucial role in the construction of a majority of its monuments. Their contribution to the city in the form of palaces, monuments, religious shrines and royal courtyards lives to this day and has helped the city unify its tradition with contemporary tourism opportunities. To know more about the ‘City of Devotees’ and its heritage, here is our list of best things to do while in Bhaktapur. 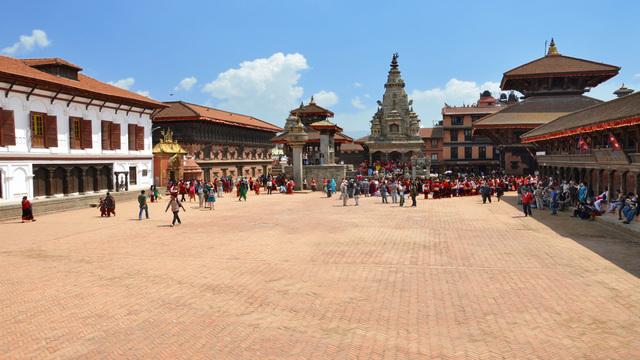 All three cities of Kathmandu Valley feature courtyards that used to be a part of the Royal Palace, and like the Durbar Squares in Kathmandu and Patan, carry the designation of being a World Heritage Site. It boasts of the presence of ancient monuments and architecture that showcases the talent of local artisans and workers of the medieval era.

Historically significant monuments like the Golden Gate, the Taleju Temple, and the statue of Bhupatindra Malla are located within the walls of the Durbar Square, along with so many other temples and shrines that bring you close to your spiritual side while exciting your senses with its hand-crafted marvels. The square also boasts of many cafes, restaurants, and shops selling jewelry, masks, and decorations. A stroll down Durbar Square is the best way to explore it all.

One of the three main courtyards in Bhaktapur, Dattatreya Tole is smaller than the Durbar Square and dates back to the 15th century. Its main attraction is the Dattatreya Temple that is dedicated to the holy trinity of Brahma, Vishnu and Shiva. Believed to be made from the trunk of a single tree, it is guarded by two stone guards Jaymal and Pata on its entrance, the same statues guarding the first step of the Nyatapole Temple. The square also includes other monuments and museums like the Brass and Bronze Museum, and the Woodcarving Museum (previously the Pujari Math). The courtyard witnesses throngs of people during the celebration of festivals like Dashain.

The most prominent aspect of Bhaktapur that sets it apart from the other cities in Nepal is its remarkable ceramic industry. In Potter’s Square, you will find local artists busy at work, firing clay pots in straw kilns, with all of the open space in the square covered with rows upon rows of finished pots drying in the sun. The friendly locals are always more than willing to demonstrate the entire process of pottery, and maybe even let you try your hand at doing so yourself. The square is lined by shops that sell numerous varieties of the finished pots, which are some of the best items to take back with you as souvenirs.

Bhaktapur is home to three historic museums, each significant in its own right. The Woodcarving Museum displays specialties of carved wood artworks, but it may be considered most famous for its Peacock Window design that is showcased on the exterior of the building. The Brass and Bronze Museum exhibits arts and objects made from brass and bronze that were an integral part of the Newari culture. The National Art Gallery features antique works depicting various Hindu and Buddhist customs from different periods. Tantric cloth paintings, known as the Hindu version of Buddhist Thangka paintings, appear prominently in the gallery along with ancient manuscripts, metal statues and stone carved objects, some of which date back to the 12th century.

Taumadhi Square serves as the entryway to Durbar Square, and like the latter, houses traditional architecture and monuments in its grounds that provide a profound insight into the city’s heritage.

The most dominating structure in the square is the Nyatapola Temple dedicated to goddess Siddhilakshmi. A lot of old buildings located within the square are residences belonging to the locals that will help you explore the living heritage of the natives. Don’t miss out on the impressive Bhairabnath Temple located close by, and the Til Mahadev Narayan Temple.

Go for a Tank Tour

The town of Bhaktapur consists of a number of large tanks along its periphery that were constructed and used in ancient times as water storage reservoirs to be used for household purposes. Today, these tanks play a significant role in Bhaktapur’s social life, where locals gather during the day time to bathe in, walk around, and feed the animals in the water tank.

The most famous of these tanks is the Siddha Pokhari, also known as Indra Daha. It is the centre of a lot of celebrations during various festivals like Indra Jatra and Naag Panchami. On the second day of the Indra Jatra, it becomes the ground for large fairs, and devotees take dips in the water tank followed by the worship of goddess Indrayani. On Naag Panchami, the locals offer bowls of rice to the serpents that reside within the Siddha Pokhari. Other important tanks in the area are Guhya Pokhari, Bhaiya Pokhari, and the Kamal Pokhari.