Tourist Places To Visit In Ravangla

Planning A Trip To Ravangla? Here's our list of top tourist places to visit in Ravangla

Ravangla is a small picturesque town located within the southern district of Sikkim. Situated on a ridge between the Maenam Hill and Tendong Hill at an altitude of over 2000 m, Ravangla offers some great views of the Himalayas, especially Mt. Kanchenjunga, among other notable peaks. The Lepcha and Bhutia communities reside in villages close to Ravangla and are a great community to mingle with. You can get to know the locals and explore more about the heritage of Sikkim.

Apart from being a breathtakingly scenic location, it is also brimming with rich cultural landmarks, making it one of the most prime holiday regions in south Sikkim. Read on to know more about some of the best places to visit in Ravangla. 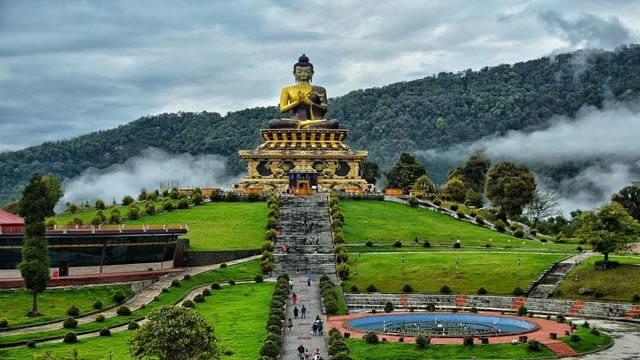 One of the most iconic sights in Ravangla is the 40 m tall statue of Gautam Buddha located in a beautiful garden that is known as the Buddha Park. It is situated within the complex grounds of Rabong monastery, and its construction was sanctioned in the year 2006 on the anniversary of Buddha to commemorate the event. The structure was completed in 2013, and has since become one of the most popular spots in Ravangla for both religious devotees and tourists alike.

Apart from being a lovely park that is a great space for the visitors to enjoy the tranquil surroundings, it also features a museum, a meditation centre, and the Cho-Dzo Lake. Being a part of the Himalayan Buddhist Circuit makes it a must-visit for trek enthusiasts as well.

The Ralang monastery belongs to the Kagyu sect of Tibetan Buddhism and is one of the most sacred locations in the state of Sikkim. It was constructed in the 18th century to commemorate the successful pilgrimage of the 4th Chogyal to Tibet. As the legend goes, when he returned from his pilgrimage, the Karmapa performed some traditional ritualistic blessings, following which the Chogyal threw some grains from the Tsurphu monastery in Tibet that landed in Ralang, and became the location of the present day Ralang monastery.

Technically, the monastery constitutes a group of two monuments that are located 3 km away from each other. The path to the original structure is considered quite difficult and requires a hike to reach the building. To make it more accessible to the visitors, a new monument was constructed and is known as the Palchen Choeling Monastic Institute. It features an extensive collection of Thangka paintings that are native to the Buddhist culture.

The Bon monastery, also known as Bonpo monastery or Bon Yung Dung monastery, is situated near the Kewzing village, which is located around 8 km away from Ravangla. It is the only non-Buddhist monastery in the area, belonging to the Bon sect, which became predominant in Tibet before the spread of Buddhism. However, it has now been accepted as a part of Buddhism, with a number of rituals from the Bon sect being adapted into Buddhism as well. It is one of only two Bon monasteries in the country.

The monument presents the Indo-Tibetan style of architecture, with the interiors decorated with beautiful paintings of the Bon deity. Regular chants of mantras resound through the grounds of the monastery during mornings and evenings, imparting an ethereal appearance to the structure.

At a distance of 4 km from Ravangla, the Barfung village consists of a small hill upon which resides the Doling gompa, a Nyingmapa monastery built in the 17th century. The structure has been built on a raised platform that offers spectacular views of the surrounding landscapes, towering peaks and the dense forests. The highlight of the monument is the apparent footprint of the deity Kanchenjunga’s horse on a stone, and a footprint of Lama Dorjelingpa on another stone; both the structures are preserved by the Lamas till today and are worshipped by them as well.

Kewzing village is located around 8 km away from Ravangla, and is the perfect place for those looking to experience the rural life in this part of the country. The local families are extremely welcoming of the tourists and even allow willing visitors to stay with them, allowing them to gain a firsthand insight into Sikkim hospitality. While in the village, do not forget to pay a visit to the ancient Mangbrue gompa and the Tumlong monastery.

Temi is the only tea garden in Sikkim, which originates from Tendong Hill along slopes that range from 1200-1800 m and is spread over 440 hectares of land. The original tea saplings are known to have been brought in from Darjeeling, producing one of the finest teas in the country. Tourists can also visit the factory here to observe the tea processing and packaging, which produces over 100 tons of tea every year.

The tea grounds are situated in a splendid location that is filled with lovely cherry blossom trees and dense greenery.  There are a couple of accommodation options for those interested in staying on the estate to enjoy the lovely views of the garden and the hills from their rooms.