Tourist Places To Visit In Rajgir

Planning A Trip To Rajgir? Here's our list of top tourist places to visit in Rajgir

Rajgir, in Bihar, India is a very old city that is surrounded by hills and well known for its venerated sites. At the centre of the city are the remains of an old wall that encircled the old city several centuries ago. Near Rajgir are some hot springs that are supposed to have properties of healing. There is a park known as Venu Vana Park that is supposed to have been a monastery that had been built for Buddha. In Nalanda district of Bihar, Rajgir was the capital of Magadha, the state that finally evolved into a famous empire known as Mauryan Empire, till the 5th century BC. Rajgir is well known for its caves and Buddhist ruins as well as Jain and Hindu temples, Muslim tombs and forts; here's our list of some great tourist places around. 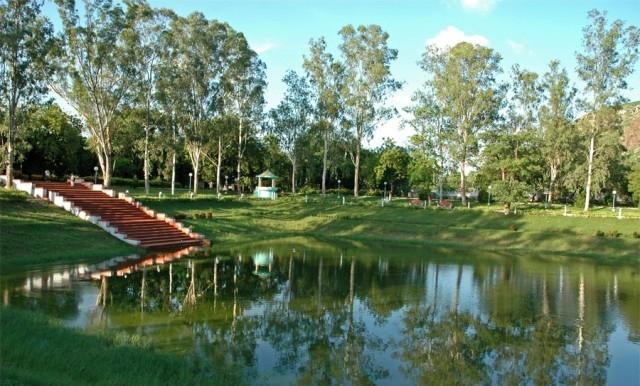 It is said that King Bimbisara donated the garden called Venuvana to Buddha who stayed here for some time. There is a pond in the garden as well as many trees that provide shade from the terrible heat. If you leave by the rear gate you could visit the Buddha Temple as well. The park is the perfect place for sitting, walking as well as meditating. Buddha bathed in the lake which is inside the park. Try to feel the vibrations of this place which has seen Buddha more than 2000 years ago.

The Vishwa Shanti Stupa which is located on top of the Gridhakuta Hill at a height of 400m was built by the Japanese as a monument that was a symbol of world peace. There are four statues of Buddha here. These depict the different stages in the life of Buddha. These are birth and enlightenment besides preaching and death. One can use the aerial ropeway to access this fine stupa.

The Rajgir Ropeway is touted as the oldest ropeway in India. Visitors will find in this ropeway a truly great experience, more like an adventure which will lead you to the very top of the beautiful Ratnagiri Hill that houses the famous Peace Pagoda also known as Vishwa Shanti Stupa. The ropeway will lift you through a height of more than 1000ft from ground level in a thrilling ride. The ride will provide some amazing views of the forest area that lies below.

The Vulture’s Peak or Griddhakuta is a major attraction in Rajgir especially for Buddhists. This is because the place is one among the three major places where Buddha preached his sermons for several years. The peak is just outside the limits of Rajgir. At a height of about 400m the peak is among the most popular places for sightseeing in Rajgir. The peak’s further claim to fame is on account of the panoramic view you can get of the surroundings from on top of the hill.

Ashoka Stupa is a construction that is made of bricks and is located quite some distance away from the popular pagoda. Said to have been built by Emperor Ashoka himself the stupa was made as a mark of respect for Griddhakuta, venerated by Buddha himself. The stupa is located right next to the Kalakanda Tank and is indeed an interesting monument for all scholars of history.

Makhdum Kund is named after Makhdoom Sharfuddin Ahmed bin Yahya Maneri who was known more popularly as Makhdoom-ul-Mulk who performed severe exercises up in the hills. These exercises were ascetic in nature. There is a shrine of the Sufi Saint at this place which is close to some warm springs. Sheikh Sharfuddin Ahmed was born on 1264 July at a village called Maner which is near Patna. A great Sufi saint who was revered by all, he died in Nalanda where his tomb lies inside a mosque. The tomb is revered by all devout Muslims who consider the tomb to be a holy place.

The Veerayatan Museum is a most absorbing Jain museum which showcases the history of all the 24 Jain Tirthankaras. There are dollhouses that are ornate and made of metal and wood. The appearance is more like three dimensional depictions. An artist called Arharya Shri who stays in this place has created several fine arts that are on display here and these deserve to be seen.

The Cyclopean Walls are walls of about 4m width that date back to 2500 years ago; and of about 40km in length these walls encircle the city. The Mauryans had built these walls with the objective of securing the city. Most of the walls are today in ruins but one can appreciate the effort that must have gone into the task of building these walls thousands of years ago.

Pawapuri is among the holiest of sites for Jains worldwide. The site was made famous by Lord Mahavira who stayed as a royal guest of King Ajatshatru at his Rajikshala and was later cremated here in 500BC also. It is believed that there was a rush to collect his ashes when he was cremated. The rush was so severe that a lot of earth was scooped out from his place of cremation and this place was filled by water and later became a holy pond. Jalmandir, a temple was built in his honour at the centre of the pond.