The name Bhitarkanika can be roughly translated to ‘Inner Beauty’ – a spectacle that is best experienced in person. The region of the park is interspersed with rivers like Brahmani, Vaitarani and Dhamra etc., which contribute towards the flourishing biodiversity of the park to a large extent. Here are some of the best places to visit when in Bhitarkarnika National Park. 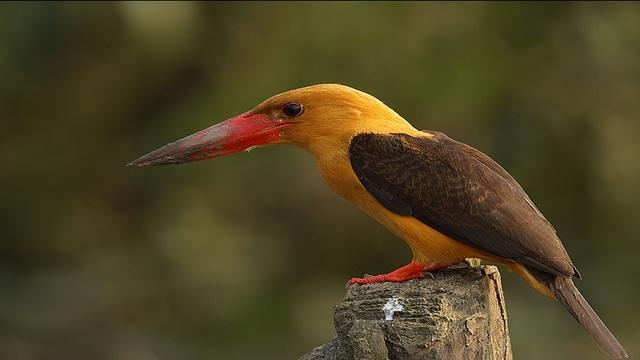 The Baggahan Bird Sanctuary is located within Bhitarkanika Wildlife Sanctuary and is home to hundreds of indigenous bird species like Black Ibis, Darters, Cormorants and Egrets, including eight different species of just the Kingfisher bird alone. During winters, there is an influx of thousands of birds from colder regions of Central Asia and Europe; bird watchers will find this time to be the best opportunity to witness the brilliant spectacle of large flocks of exotic birds gathered in one place.

Ekakula Island is a boat ride away from Bhitarkanika, and can be best described as an island only during high tide. During low tide, one can observe that Ekakula is actually connected to the mainland by a small stretch of land, and is generally just a serene beach that offers amazing opportunities to witness beautiful sunrise and sunsets. Habalikhoti is located a little further away and also has a small forest lodge where tourists can stay and enjoy the secluded beach for a couple of days.

The only marine wildlife reserve in the country, Gahirmatha Marine Sanctuary is located to the east of Bhitarkanika National Park and separates the park from the Bay of Bengal. It is best known for the mass mating and nesting activities of the rare Olive Ridley Turtles, which attracts hundreds of tourists each year during the mating season. When the eggs hatch a couple of months later, the baby turtles rushing towards the ocean creates a beautiful sight that will last in your memories for a long time to come.

Dangmal is one of the islands in the estuarine deltas that make up Bhitarkanika National Park, which often has the most number of animals concentrated in this region. A crocodile breeding program at Dangmal has successfully managed to release more than 2000 crocodiles into the creeks and estuaries of the sanctuary since 1977. There is also a 9th-century temple here dedicated to Lord Shiva that is an added highlight of the park.